So I’ve been in the Girlfriends’ Cyber Circuit (GCC) for more than a year now, and I think it’s about time I ask some new questions. So Jennifer Echols, the author of the fabulous new book ENDLESS SUMMER which was released this week through Simon Pulse, has agreed to be my guinea pig and test out the new Q&A. And what better book to start with than hot beach read right in time for Memorial Day weekend? 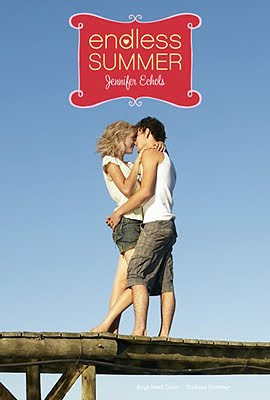 The Boys Next Door and the sequel, Endless Summer, in one volume!

Lori can’t wait for her summer at the lake. She loves wakeboarding and hanging with her friends–including the two hotties next door. With the Vader brothers, she’s always been just one of the guys. Now that she’s turning sixteen, she wants to be seen as one of the girls, especially in the eyes of Sean, the older brother. But that’s not going to happen–not if the younger brother, Adam, can help it.

Lori plans to make Sean jealous by spending time with Adam. Adam has plans of his own for Lori. As the air heats up, so does this love triangle. Will Lori’s romantic summer melt into one hot mess?

Jennifer: I took a very eye-opening trip out west right after college. I grew up in central Alabama, where the landscape is forested hills and you rarely get a glimpse of the lay of the land. Driving through Texas, New Mexico, Arizona, and Colorado was like visiting another planet. At one point I looked out on the horizon in Arizona and realized I was watching a train. An ENTIRE train, not just one boxcar at a time disappearing into the forest. At another point I was driving toward the Great Sand Dunes National Park in Colorado. I could see the white sand, so I figured we were almost there—because in Alabama, if you can see something behind the trees, you ARE almost there. We drove for another three hours before arriving.

Sounds amazing! I would love to drive cross-country.
Q: I often talk about how I didn’t always “know” I wanted to be a writer. Did you? Or did you have other plans when you were little?

Jennifer: I knew I wanted a creative job. I thought I might want to be an artist, and my first major in college was actually music, but a career as a novelist was always in the back of my mind.

Jennifer: I was drum major of my high school marching band, and we had a football game that night. So I spent my birthday directing the band, which was my favorite thing to do anyway!

Jennifer: I do start with an outline. I write about 150 pages organically and not in order! It drives me crazy! Then I go back to my outline, straighten things out, and finish the book.

Jennifer: I was standing in my bedroom, staring at my closet door, pacing the hardwood floor, on the phone with my agent. I’m not sure why I remember this so clearly! I had revised the proposal quite a few times and I had really fallen in love with the first chapter narrated by the hero, Adam, so I guess I remember it along with the feeling of such relief that I would have the chance to write this book.