Dear Bully: Why Do You Pick On YA Authors?

Posted on September 9, 2011 by Administrator — No Comments ↓

So I’m about halfway through DEAR BULLY (the awesome anthology I contributed an essay to and that went on sale last week), and I commented to the DH about how many other authors have stories similar to my own. He says, “So you’re saying kids like to pick on future authors?” Huh. 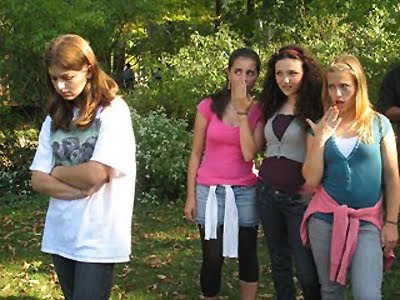 I’m not saying that it’s only future authors who get picked on, but it is an interesting theory. Whether we were cheerleaders, tuba players, funny guys, or music aficionados in our younger years, we all were bullied. And we all had it within us to one day write a novel. I wonder if despite our varying upbringings, we all gave off a similar vibe.

For example, a good chuck of the essays (so far) note that the author was picked on for being “different.” Now, this means different things in different decades, but still it seems to be a common thread. I know I felt “different” attending high school in the ‘90s when everyone was into grudge and wearing flannel. Don’t get me wrong, I wore the Chuck Taylors and baggy jeans, but I knew it wasn’t me. I knew I felt differently about the fad and went with it anyway just to fit in.

But maybe it showed. Maybe classmates could sense I was “different.”

Another trend is authors noting that they performed well in school. Not that they were picked for their grades per say, but they did think it made them a target. I’m sure a lot of bullied kids can agree with that. I wonder if we surveyed the bullies, whether many of them would say they did well academically? (Somehow, I doubt it.)

It’s a shame we didn’t all know each other when we were younger, we could have all banded together. But I guess we did as adults. As one author, Sara Bennett Wealer, said, “the girl you make fun of? She’s the cool one at cocktail parties.”