Fifty Shades of An American Psycho

Not long ago, Bret Easton Ellis, the author of AMERICAN PSYCHO, had publicly stated his desire to write the screen adaptation of FIFTY SHADES OF GREY. As someone who just recently finished reading all three FIFTY novels (oh, yes, I read all three of them) can I say that Ellis would have been a perfect choice. Seriously, I can’t be the only woman who read these books and kept wondering when Christian Grey was going to hack Ana to pieces while listening to Huey Lewis?

I even repeatedly told my husband that if this book were told from Christian’s point of view, it would read like AMERICAN PSYCHO. I guess Ellis thought the same thing. Too bad it went to someone else, because he could have done great things with this archetype. Though it may have come across a little darker than a shade of grey, considering the book is about a man who asks a recent college grad to sign a legal document giving him total control over her life and allowing him to beat the crap out of her any time he wants for his own sadistic sexual pleasure.

I’m not joking. That’s the entire plot of the first book.

Now, I’m not a prude. I knew these books were about a dominant-submissive sexual relationship. But the way the country, and women in particular, reacted to them, I expected more silk blindfolds and strawberries, a la NINE 1/2 WEEKS, than a sweeps episode of CRIMINAL MINDS.

It’s one thing to fantasize about a guy who’s confident and takes control, it quite another to dream of a man who wants to “punish” you with canes, whips and belts in his “red room of pain” for anything he perceives a disobedience. In one scene, he beats Ana just for rolling her eyes. You could practically hear the “dun dun” of LAW & ORDER as the SVU detectives arrived at Christian’s apartment to find Ana’s lifeless body chained to a cross in his “playroom.”

And don’t get me started on the plagiarism. For those who don’t know, FIFTY SHADES started at TWILIGHT fan fiction. You can read all about it here. Personally, I think fanfic is a great creative outlet for aspiring writers and enthusiastic fans, and I completely support it as a hobby. However, as an author, I find it very disturbing for someone to profit from of another author’s characters, plot, and prose. As has been reported by many, Ana and Christian are mirror images of Bella and Edward. The books even have a Jacob, Alice, Victoria and James. Bella’s parents are just like Ana’s parents, Edward’s siblings are adopted just like Christian’s. In fact, I don’t think there’s an original character in the book, aside from Christian’s maid and security guard.

Plus, as a woman, I couldn’t help but notice that TWILIGHT isn’t the only source material E.L. James borrowed from. There are the lines almost directly quoted from PRETTY WOMAN. Like when Ana wakes up in Christian’s hotel room and he says, “I didn’t know what you liked, so I ordered a selection from the breakfast menu.” And then there’s dining room table full of food. Or the time when Ana asks, “Do people always do what you tell them?” And then they have sex on a grand piano. 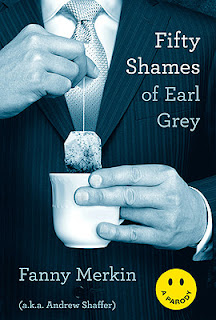 The list goes on and on. So I’m curious how the movie adaption will be (and disappointed Ellis won’t be penning the script). And maybe some day we’ll see a FUNNY OR DIE version of the awesome parody Fanny Merkin (a.k.a. Andrew Shaffer) wrote called FIFTY SHAMES OF EARL GREY. From Ana having an “inner guidette” as part of her inner monologue to lines like “Holy Mother Effing Sparkly Vampires Is He Hot,” the book is worth a really good laugh. I even have a blurb on the back cover.

One comment on “Fifty Shades of An American Psycho”