Ever wish you could just fly off and leave everything behind? Now imagine you’re a teen who actually can fly her own plane, only she’s stuck doing the bidding of two teen brothers who may not have the best intentions. That’s the intriguing concept behind GCC member Jennifer Echols’s fun new book, SUCH A RUSH, published this month through MTV Books. 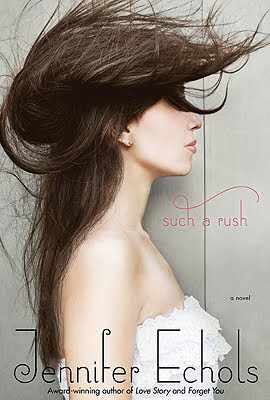 High school senior Leah Jones loves nothing more than flying. While she’s in the air, it’s easy to forget life with her absentee mother at the low-rent end of a South Carolina beach town. When her flight instructor, Mr. Hall, hires her to fly for his banner advertising business, she sees it as her ticket out of the trailer park. And when he dies suddenly, she’s afraid her flying career is gone forever.

But Mr. Hall’s teenage sons, golden boy Alec and adrenaline junkie Grayson, are determined to keep the banner planes flying. Though Leah has crushed on Grayson for years, she’s leery of getting involved in what now seems like a doomed business–until Grayson betrays her by digging up her most damning secret. Holding it over her head, he forces her to fly for secret reasons of his own, reasons involving Alec. Now Leah finds herself drawn into a battle between brothers–and the consequences could be deadly.

Jennifer: None of the characters are based on real people, but I have a lot of experience with pilots and small-town airports. My father is a private pilot who got his license when I was five years old, so I’ve spent a lot of time hanging out in a corrugated metal hangar and flying over the countryside.

Q: Where did the idea for you latest novel come from?
Jennifer: We were on a family vacation at the beach when my dad decided to go to the airport and watch planes take off and land, which is something he does regularly when the family vacation gets to be too much! My son and I went with him, and we sat in rocking chairs on the front porch of the airport office, watching the advertising banner planes take off, snag their banners, drop their banners, and land again. The whole process looks alarming and dangerous, and when my dad told me these pilots tend to be very young because they’re amassing hours to become airline pilots someday, I knew that was my next YA novel.

Q: Where were you when you found out that your latest novel was going to be published? Tell us the story.
Jennifer: This is my fourth novel in this genre with the same publisher, so we were just going back to contract. The negotiations went on and on over lots of phone conversations. In the end, we were able to sign a hardcover deal. I think the book is beautiful and I couldn’t be more pleased with how the images turned out.