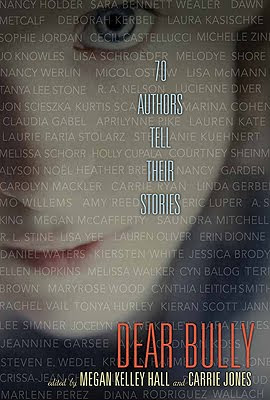 As always, here’s a little bit about her book to get you hooked:
You are not alone.

Discover how Lauren Kate transformed the feeling of that one mean girl getting under her skin into her first novel, how Lauren Oliver learned to celebrate ambiguity in her classmates and in herself, and how R.L. Stine turned being the “funny guy” into the best defense against the bullies in his class.

Today’s top authors for teens come together to share their stories about bullying—as silent observers on the sidelines of high school, as victims, and as perpetrators—in a collection at turns moving and self-effacing, but always deeply personal.

Here’s what Megan had to say:

Q: What inspired you and Carrie to put together DEAR BULLY?

Megan: We formed the group YAAAB (Young Adult Authors Against Bullying) in April 2010 when we both coincidentally blogged about the Phoebe Prince case on the same day. I reached out to Carrie expressing my frustration with this case and the fact that bullying seemed to be growing at a ridiculously fast rate. As a Massachusetts resident and having already spoken about bullying in schools, I was horrified after hearing about the bullying that took place in the Phoebe Prince case. While writing SISTERS OF MISERY and THE LOST SISTER, I had to dig deep to make “mean girls as evil as I possibly could.”

So when I heard about all the bullying and bullycide stories in the news, I felt like the bullies had jumped off the pages of my book and into real life. I was also disheartened by the numerous times I’d done book signings and would say to readers, “I hope you never meet girls as mean as the ones in my book.” Shockingly, they almost always said, “We already have.” Carrie Jones was also moved to do something, as she was the target of bullying as a young child due to a speech impediment. Together, we felt that we owed it to teen readers to discourage bullying — to make it “uncool.”

I started by creating a Facebook page that kicked off an entire “movement” to end bullying. This was the day that Carrie and I, along with other authors decided to use our platform as Young Adult authors to actually facilitate change and to be a voice for those kids who cannot speak out or are too afraid to be heard.

Q: How did you go about putting together an anthology with 70 authors? That’s a lot of essays…

Megan: Right away, a large number of authors jumped on board with this cause — wanting to be involved in any way possible. The Facebook group grew from 5 to 1500 members in one weekend and is now closing in on nearly 5,000 members. Carrie and I were thrilled when HarperTeen offered to put all of the stories into an anthology. The thought of having 70 authors – well-known, highly successful writers – sharing their personal bullying stories with their fans was something beyond what they had ever hoped for.

Q: What are most of the essays about?

Through these stories, the authors want to show that they understand what teens are going through today. It is important to encourage bystanders to speak up and make bullying unacceptable. Parents and adults must get involved. Bullying is something that people no longer have to endure—at least, not by themselves.

Though quite a lofty mission, the goal of DEAR BULLY is to help just one person get through a difficult time, and hopefully make bullying a thing of the past.

Q: How can readers get involved in the DEAR BULLY movement?

Thank you, Megan! DEAR BULLY has been getting a lot of press, you can read more about it in Better Homes & Gardens, The New York Times, The Boston Globe, Glamour Magazine, Seventeen.com and more. Now, everyone go out and buy books, lots and lots of books!