Sure, a lot of fictional characters claim to be able to talk to the dead, but how many of them have dated the dead. Adds a whole new twist to the after life, huh? And that’s exactly why I’m so intrigued by GCC Member Jeri Smith-Ready’s new novel, SHADE, just released through Simon Pulse. 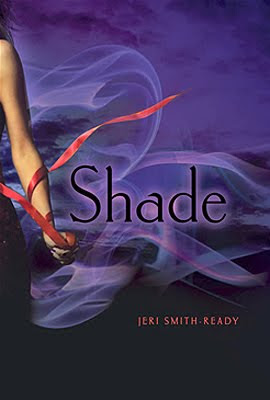 Love ties them together.
Death can’t tear them apart.

Best. Birthday. Ever. At least, it was supposed to be. With Logan’s band playing a critical gig and Aura’s plans for an intimate after-party, Aura knows it will be the most memorable night of her boyfriend’s life. She never thought it would be his last.

Like everyone born after the Shift, Aura can see and hear ghosts. This mysterious ability has always been annoying, and Aura had wanted nothing more than to figure out why the Shift happened so she can undo it. But not with Logan’s violet-hued spirit still hanging around. Because dead Logan is almost as real as ever. Almost.

It doesn’t help that Aura’s new friend Zachary is so understanding—and so very alive. His support means more to Aura than she cares to admit.

As Aura’s relationships with the dead and the living grow ever complicated, so do her feelings for Logan and Zachary. Each holds a piece of Aura’s heart…and clues to the secret of the Shift.

Here’s what Jeri had to say:

Q: In AMOR AND SUMMER SECRETS, Mariana discovers a hidden family secret. Are you a good secret keeper?

Jeri: I’m a secret vault. Last year I took my husband on a surprise trip to Vegas for his birthday, and he never suspected a thing, even though I’d been planning it with our friends for almost two years. The key to not spoiling the surprise, of course, was to not tell anyone who wasn’t directly involved in the covert operation. Well, them and complete strangers.

Q: What is the favorite place you ever traveled to, and what was the coolest thing you saw/did there?

Jeri: This is a tough one, because I love to travel, too, and I’ve been to a lot of cool, out-of-the-way places. But one of the most beautiful moments of my life occurred when I was twenty years old. Two friends and I were staying at a farmhouse/B&B outside of Anstruther, Scotland (a fishing village near St. Andrews). I took a walk alone outside around midnight, but even at that late hour the sky wasn’t completely dark, because it was June. The sky was this gorgeous, otherworldly periwinkle. I walked into a field of heather and crouched down so that my eyes were at the level of the long, swaying flowers. It was totally silent, except for an occasional cow lowing in the distance. Magical.

Okay, I just love the idea that you can walk through a field alone at midnight in Scotland. You can tell I live in cities, right?

Q: I often tell the story of how a psychic once predicted that I would go on to write children’s books. Have you ever visited a psychic?

Jeri: I’ve been to one psychic who was kind of a letdown—all of her predictions were kind of vague and generic. But about a year ago I had an incredible tarot reading. All three cards in the spread were Major Arcana—the odds of that are pretty small. The reader was stunned at how positive it was. It basically said that if I applied the full force of my creative energy and didn’t let myself be distracted, great things would happen for me. I went home and brought up the descriptions for the first two cards (the Magician and the Chariot) in a web browser. I then kept those browser tabs open to inspire me every day while I worked.

Q: My character Mariana spends her summer in Puerto Rico connecting with her father’s heritage. Have you ever researched your family tree?

Jeri: Sadly, with a name like Smith, it’s hard to delve very deeply into geneaology. The only ancestors I have a halfway decent history for are my maternal grandmother’s family, who came over from Ireland during the potato famine. Pretty boring, sorry.

Did you know there’s a Potato Famine Memorial in Lower Manhattan? Very random.

Q: Where were you when you found out that your book was going to be published?

Jeri: The day SHADE went to auction, I was at home, hoping the publishers would actually show up. This was only five days after “Black Wednesday,” December 3, 2008, when a lot of companies (including Simon & Schuster, who ended up winning the auction), had big layoffs and everyone was very doom-and-gloom.

But it all went well, and my husband and one of my friends stayed with me (my friend virtually, my husband in person) through a nail biter of an afternoon. I don’t have pictures, because I was probably in my PJs and glasses, which is how I look most days.

Thank you, Jeri! Now, everyone go out and buy books, lots and lots of books!