Why do all gothic mansions have to be haunted? Because they’re just creepy, that’s why—especially if you’re forced to live there with some creepy step-father. That is why you must read GCC Member Eileen Cook’s new book, UNRAVELING ISOBEL, out this month through Simon Pulse. 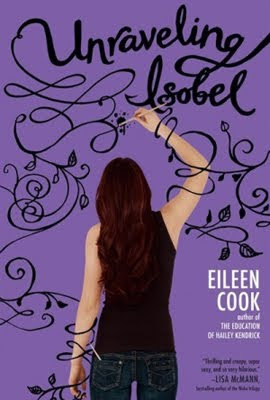 Isobel’s life is falling apart. Her mom just married some guy she met on the Internet only three months before, and is moving them to his sprawling, gothic mansion off the coast of nowhere. Goodbye, best friend. Goodbye, social life. Hello, icky new stepfather, crunchy granola town, and unbelievably good-looking, officially off-limits stepbrother.

But on her first night in her new home, Isobel starts to fear that it isn’t only her life that’s unraveling—her sanity might be giving way too. Because either Isobel is losing her mind, just like her artist father did before her, or she’s seeing ghosts. Either way, Isobel’s fast on her way to being the talk of the town for all the wrong
reasons.

Here’s what Eileen had to say:

Q: In ADIOS TO ALL THE DRAMA, Mariana is a bridesmaid in her cousin’s wedding. How many times have you been a bridesmaid and what’s the worst dress you ever wore?
Eileen: I happen to be one of those people that other people like to have in their wedding. I think they’re counting on me to provide the comic relief. I’ve been a bridesmaid around a dozen times. Most of the dresses were pretty decent (how’s that for lucky?) but one of them was a shamrock green color that made me look like I was getting over a raging case of malaria.

Eileen: I don’t tend to base my characters on any real people, but I do steal little details here and there, the way someone dresses or a quirky habit. One of the best things about being a writer is the chance to people watch all the time and daydream and get to call it work. I have to go to the coffee shop and listen in on other conversations- it’s research!

Eileen: The hardest thing for me was finding my agent. The biggest reason was that when I first started looking, I wasn’t actually ready. I thought I was ready. I was sure the book I had written was genius! It was only after every living soul who worked in publishing shot me down that I realized that maybe the book wasn’t as good as I thought. I went back to work and wrote another book, Unpredictable, and that became my first published book.

Eileen: I work as a counselor and am interested in mental health issues. I think one of the most difficult things about having mental illnesses is that you can’t trust your own perception of reality. How do you cope when you aren’t sure what you see and hear is real? I decided I wanted to write about Isobel who struggles with trying to figure out if she’s seeing a ghost, if she’s going crazy, or if her step dad is trying to make everyone think she’s crazy so he can get rid of her.

Plus, I’ve always loved gothic novels. I love creepy old houses, buried family secrets and the potential for a ghost or two. Not to mention a cute boy in the picture.

I’m very lucky in that I work with a great team at Simon Pulse. I had recently finished my book, The Education of Hailey Kendrick. I was having lunch with friends and my agent called to tell me that my editor was offering me a two-book deal for whatever I wanted to write next. I didn’t even have a story idea yet. I was thrilled. I convinced my friends to join me for a celebration!

Thank you, Eileen! Now, everyone go out and buy books, lots and lots of books!