What could be worse than having your plane crash? Forgetting everything you ever knew. That’s the premise of GCC member Jessica Brody’s latest novel, UNREMEMBERED, out this month through Farrar, Straus, & Giroux. 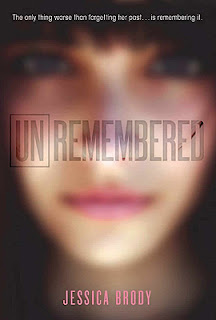 The only thing worse than forgetting her past…is remembering it.

When Freedom Airlines flight 121 went down over the Pacific Ocean, no one ever expected to find a single survivor; which is why the sixteen-year-old girl discovered floating amid the wreckage—alive—is making headlines across the globe. She has no memories of boarding the plane. She has no memories of her life before the crash. She has no memories…period. As she struggles to piece together her forgotten past and discover who she really is, every clue raises more questions. Her only hope is a strangely alluring boy who claims to know her. Who claims they were in love. But can she really trust him? And will he be able to protect her from the people who have been making her forget?

Set in a world where science knows no boundaries and memories are manipulated UNREMEMBERED by Jessica Brody is the first novel in a compelling, romantic, and suspenseful new sci-fi trilogy for teens.

Here’s what Jessica had to say:

Jessica: Thankfully I have NEVER been a bridesmaid! It’s something I take pride in! But I’m attending an Indian wedding for the first time this weekend and I’m so excited because I get to wear a Sari!

Jessica: In this book there aren’t many characters who are based on real people. However, I did base a lot of Seraphina’s “abilities” on things I wish I could do. Like the fact that she can speak pretty much every language on the planet? Yep, that’s a skill I definitely wish I had!

Jessica: Definitely finding an agent. I queried over 100 agents before finding mine (and even she rejected me the first time around! But I rewrote the book based on her feedback and she signed me with the next draft.) Once I found an agent, she actually sold the book quite quickly, which was a huge relief!

Jessica: A few years ago, I read a newspaper article about a teen girl who was the sole survivor of a plane crash. I was instantly fascinated by the story. Namely because they had no idea why she survived when no else did. I started brainstorming reasons as to why she was so lucky. One particular reason (a rather intricate, science-fiction-inspired one) stuck in my mind and refused to leave. It continued to grow and blossom until I had an idea for an entire trilogy. A trilogy that starts with a mysterious plane crash and a single survivor.

Thank you, Jessica! Now, everyone go out and buy books, lots and lots of books!