Get Some Good Karma with GCC Member Jessica Brody

In the age of the THE SECRET, sometimes the universe is just too busy to send everyone everything they’re thinking of in a timely manner. That’s why GCC author Jessica Brody decided to find out what would happen if girls starting taking Karma into their own hands. Not a bad idea, right? And that’s why I’m so excited about her new book, THE KARMA CLUB, which debuted on April 27 from Farrar, Straus, Giroux Books for Young Readers. 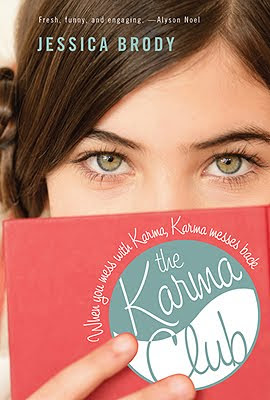 When you mess with Karma, Karma messes back…

Madison Kasparkova always thought she understood how Karma works. Do good things and you’ll be rewarded, do something bad and Karma will make sure you get what you deserve. But when Maddy’s boyfriend cheats on her, nothing bad comes his way. That’s why Maddy starts the Karma Club, to clean up the messes that the universe has left behind and get back at the people who have wronged them. Sometimes, though, it isn’t wise to meddle with the universe. It turns out Karma often has plans of its own.

Watch the book trailer for even better taste of Karma!

Here’s what Jessica had to say:

Q: In AMOR AND SUMMER SECRETS, Mariana discovers a hidden family secret. Are you a good secret keeper?

Jessica:I’d like to think of myself as a good secret keeper. I don’t know though. Tell me a secret and we’ll see how long I can keep it. 

Q: I love to travel. What is the favorite place you ever traveled to, and what was the coolest thing you saw/did there?

Jessica: I do that too! In my two novels before THE KARMA CLUB, there are a few chapters that take place in Paris because it’s my favorite city in the world and because I lived there for a year in college. I try to go back as often as possible! The coolest thing was when my first book released in France and the French publisher brought me out to promote it. That was seriously unreal! I’m thinking of setting some scenes of my next book in India just so I have an excuse to go there. I’ve always wanted to!

Q: I often tell the story of how a psychic once predicted that I would go on to write children’s books. Have you ever visited a psychic?

Jessica: Ooh, I have a crazy psychic story too! I visited one toward the beginning of 2006, when I was trying to sell my very first novel The Fidelity Files and not having much luck at it. I was in the process of rewriting. I went in and the psychic immediately told me I was a writer (which I had NOT told him) and that I was working on something about cheating spouses (that’s what Fidelity Files is about!) and that I would sell it before the end of 2006. I ended up selling it in November 2006 (with a month to spare!). It was totally creepy but WAY cool!

Now THAT is a psychic story I love! Maybe your psychic knows my psychic?

Q: My character Mariana spends her summer in Puerto Rico connecting with her father’s heritage. Have you ever researched your family tree?

Jessica: I joined ancestry.com for a little while and had so much fun building and exploring my family tree. All of my relatives came over to the US from Eastern Europe in the early 1900s. I was even able to find the passenger manifest from the ship my great grandfather was on! It was pretty cool.

Q: Where were you when you found out that your book was going to be published?

Jessica: I was actually sitting in my office when I first found out. But I certainly wasn’t sitting for long! There was a lot of jumping and dancing around the room. I don’t have any pictures of that day, but here’s one of the day I signed the actual contract. That’s one big smile! 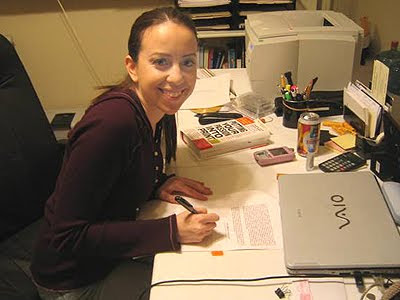 Thank you, Jessica! And please visit her website because she’s giving away FOUR Flip Video Cameras (as well as TONS of other cool prizes!). Enter to win!

Now, everyone go out and buy books, lots and lots of books!