So You Think You Can Write? (Working Title)

This idea came to me in the shower (where all great ideas strike), the almighty television has given most other industries a shortcut to success. Singers have American Idol, America’s Got Talent, et al. Models have Tyra Banks. Fashion designers have Project Runway. There’s even Top Chef, HGTV’s Designer Star, Shear Genius, So You Think You Can Dance. The list is ridiculously extensive. But what do we have, writers? Nothing. And I propose we change that.

Here’s my thought: our great champion of books, Oprah Winfrey, is going into talk show retirement. But she is not leaving us behind, dear viewers, she’s starting OWN: The Oprah Winfrey Network. So I’ve got the perfect pitch for our publishing Midas:

So You Think You Can Write? (Working Title)

We get three judges to sit on a panel and judge the work of potential contestants/queriers. Each week, wannabe writers are assigned a new genre. Thriller! YA! Screen play! 18th Century English Literature! They have seven days to research the genre, write a first chapter, film a Pepsi commercial (we need sponsors), and a put together a plucky video package telling viewers “Something we don’t know about them” or “Some tragic family hardship to tug at our heartstrings.” 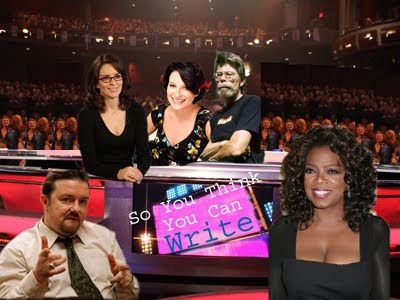 Then our panel of judges review the work. I’m flexible here (okay, maybe not) but my dream team would be the following: Stephen King, Tina Fey, and Meg Cabot. Think about it. Mr. King could be the “mean” judge (“I’ve seen pig’s blood better than this…”); Ms. Fey could be the “honest yet funny” judge (“You need to work on your voice so your readers will want to go to there…”); and Ms. Cabot could be the “nice” judge (“You get my tiara for this, sweetheart!”).

And now we just need a host. I’d say Ryan Seacrest because I think there are a few hours when he’s sleeping that he could squeeze in another job, but on the off chance he doesn’t want to fly to New York each week (where we’d obviously film), then I say we go British. Every reality show needs a Brit, it’s just the way it is. So I’m gonna go with Ricky Gervais. Anyone who created The Office can understand writers’ desires to quit their day jobs.

Each week, all the first chapters could be downloaded on iTunes (like Glee!). The winner could get a book deal, a promise to be an Oprah Book Club selection, and $100,000 to start their own line (wait, that’s Project Runway, but you get the idea).

Okay, I know what you’re thinking: Diana, who in the world is going to watch people write? And you have a point. But if America can watch someone bake a cake, raise their eight kids, buy a wedding dress, or have an drug intervention, then why not write? And really, it’s the Oprah Network. Will it really disrupt their busy schedule of teaching us to live our best lives and love ourselves thin? It’s a natural fit.

So what do you guys think? Should I Google Oprah’s number and giver her a call?

(P.S. If you haven’t noticed by now, I’m knee deep in edits and starting to go a little crazy. But hey, it could work…)

POP CULTURE RANT: General Hospital
Does it really need to be said that women who watch soap operas aren’t exactly looking to see an 18-year-old boy get raped in prison at three in the afternoon? And here’s the twisted thing, I’m not joking. Sure, these things “happen in real life,” but since when are soap operas about reality? If I wanted that, I’d watch HBO. Honestly, I have no idea what was going on in that writer’s room when this idea was pitched. “Hey, let’s do a love triangle!” “No, let’s do prison rape!” It’s sick, folks. I started watching soaps when I was five years old with my grandma. Imagine what the audience out there could be for this…