Oh, who doesn’t remember going down the shore and meeting a cute local (year-round resident), shoobie (one-week vacationer), or schlocal (full-summer vacationer)? The sand and surf really give “summer fling” a warmer brighter context. And GCC Member Jenny O’Connell is going to give you plenty of young summer romance in her two Island Summer novels, LOCAL GIRLS and RICH BOYS out now through MTV Books. 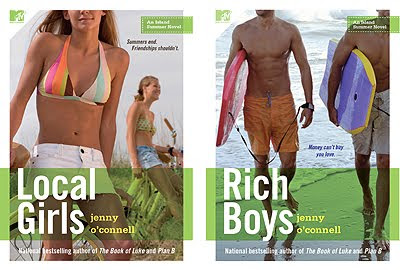 Bestselling author Jenny O’Connell presents a sizzling series for summer. Her first two Island Summer novels, LOCAL GIRLS and RICH BOYS highlight the lives of the summering visitors, the year-round locals living in the beach towns of Martha’s Vineyard, and the fireworks that explode when they combine for three steamy months.

In LOCAL GIRLS, friendships are in danger of ending with the summer. Kendra and Mona are best friends, local girls who spend their summers catering to rich tourists and the rest of the year chafing against small-town life. Then Mona’s mom marries one of the island’s rich summer visitors, and Mona joins the world of the Boston elite, leaving Kendra and Martha’s Vineyard behind. When Mona returns the following summer, everything is different.

Unlike his sister, Mona’s twin brother Henry hasn’t changed. He’s spending his summer the way he always has: with long, quiet hours fishing. Early mornings before work become special for Kendra as she starts sharing them with Henry, hoping he can help her figure Mona out. Then Kendra hatches a plan to prove she’s Mona’s one true friend: uncover the identity of the twins’ birth father, a question that has always obsessed Mona. And so she begins to unravel the seventeen-year-old mystery of the summer boy who charmed Mona’s mother. But it may prove to be a puzzle better left unsolved–as what she is about to discover will change their lives forever…

In RICH BOYS, Winnie jumps at the chance to babysit for a wealthy summer family and earn some extra money—but soon learns that life in the Barclay’s beautiful vacation home isn’t as perfect as it appears. And what was supposed to be a carefree summer quickly becomes more complicated than she ever thought possible.

Here’s what Jenny had to say:

Jenny: We did a lot of road trips in college (I went to a women’s college, so we often got in the car and headed to schools where we had a better chance of meeting the opposite sex). But the funniest road trip story would have to be the road trip I took right after college with my best friend. I was heading back to school and she was heading to NYC for a job, so we spend 3 weeks driving around the country, just us, a tent, a box of wheat bread and peanut butter and jelly and $200. We were nuts!! I don’t know how our parents let us do it. We spent nights in tents with bisson wandering around us (Yellowstone National Park), woke up in 100 degree heat in a tent that was not well ventilated, which is why my best friend was practically panting for air (Moab, Utah), but when we left Scottsdale, AZ for the Grand Canyon it was pretty funny. We managed to drive for hours until we saw a sign for Las Vegas, which meant that we missed the biggest gaping hole in the whole damn earth. Just drove right around it. We made up for it with a night in Vegas, but we had to circle back the next day and find that freaking Canyon!!!

Jenny: Nope. Wasn’t even an English major. Dropped the only English class I ever took in college because I hated reading stuff I didn’t want to read. When I was “little” I: wrote advertising jingles; opened a bank in my closet, complete with credit card machine made out of cardboard; wrote a play; ice skated for hours and made up my own routines; painted rocks and made mobiles that I’d hang from my bedroom ceiling. So while I wasn’t terribly focused, I guess you could say I was imaginative.

My sister and I wrote a play when we were little too. It was called ROCK & ROLL USA. Genius stuff. Very 80s.

Jenny: My parents threw a surprise party for me. I got home on a Saturday afternoon and a bunch of my friends were there. My parents gave me a little jewelry box with a sweet silver keychain with a heart on it. And a key. I got excited. Until I realized it was a key to our family car. (I did end up getting my own car a month later when my parents realized there was no way in hell they wanted me driving their car).

Jenny: I don’t outline. I don’t write chronologically. I just write what feels easiest to write at the time, which could be a scene, the ending or the beginning.

Jenny: I’d already written and published 8 books when these two were sold. But I was so happy because I love Martha’s Vineyard and couldn’t wait to write about it. Once the publisher bought the books I wrote both of them in five months. Then I was braindead. Which is why I’m just starting to write a new book right now.

Thank you, Jenny! Now, everyone go out and buy books, lots and lots of books!