NaNoWriMo Fail… I Regret That I Must Admit Defeat

So it is with heaviness in my heart that I confess to you that I have let down the NaNoWriMo Gods. I will not have a new 50,000-word manuscript completed by the end of the month. I tried, believe me! But circumstances got in the way. No really! I swear! 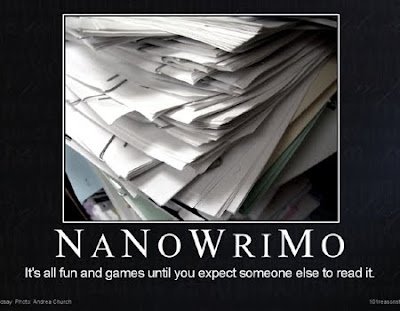 I don’t want to get all excusey on you, but I really have had a tough go of it in the last couple weeks. There was a sudden death in the family, a funeral, and then a whopping throat virus that made it nearly impossible to swallow anything other than broth for days. Seriously, I think my virus is keeping Campbell’s in business.

And while I’m getting better now, I think I missed too much NaNoWriMo time to hit the 50K goal. But that doesn’t mean I’m abandoning the book! I’m still working on it, but at less of a psychotic pace. My mysterious new character, Robyn, and her three morally-questionable sisters will see their day in print! I’ll keep you posted on the progress.

For those of you who are still in the thick of NaNoWriMo madness, I tip my hat. You guys rock! It’s takes some Herculean dedication to complete a manuscript in one month and I commend all of you for keeping your butts in those chairs. Congrats!

POP CULTURE RANT: George W. Bush
Anyone else find the press tour for his memoir a little odd? First, he seemed more articulate and likeable during his Matt Lauer and Oprah interviews than he ever did during his 8 years in office. I may finally be starting to see why people want to have a beer with this fellow. (Because when he was drinking, he was awesome.) Second, I think he passed blame onto everyone from the Governor of Louisiana to Kayne West for his administration’s failures. The whole “whoa is me” victim-card doesn’t really work on a president.