If you’re looking for a good LOVE STORY to curl up with before Labor Day, then you have to try GCC Member Jennifer Echols’ new novel, LOVE STORY, out this month through MTV Books. 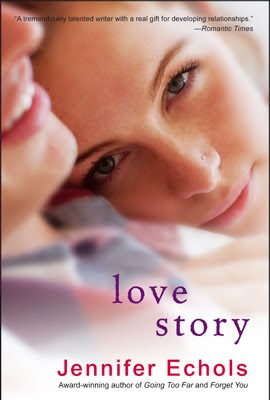 For Erin Blackwell, majoring in creative writing at the New York City college of her dreams is more than a chance to fulfill her ambitions – it’s her ticket away from the tragic memories that shadow her family’s racehorse farm in Kentucky. But when she refuses to major in business and take over the farm herself someday, her grandmother gives Erin’s college tuition and promised inheritance to their maddeningly handsome stable boy, Hunter Allen. Now Erin has to win an internship and work late nights at a local coffee shop to make her own dreams a reality. She should despise Hunter… so why does he sneak into her thoughts as the hero of her latest writing assignment?

Then, on the day she’s sharing that assignment with her class, Hunter walks in. He’s joining her class. And after he reads about himself in her story, her private fantasies about him must be painfully clear. She only hopes to persuade him not to reveal her secret to everyone else. But Hunter devises his own creative revenge, writing sexy stories that drive the whole class wild with curiosity and fill Erin’s heart with longing. Now she’s not just imagining what might have been. She’s writing a whole new ending for her romance with Hunter… except this story could come true.

Q: In ADIOS TO ALL THE DRAMA, Mariana is a bridesmaid in her cousin’s wedding. How many times have you been a bridesmaid and what’s the worst dress you ever wore?
Jennifer: I have been a bridesmaid three times. Two of the dresses are tied for worst place: one was shiny teal with poofy shoulders and an asymmetrical hem, and the other was a bright purple suit. Predictably, my best dress was my own! The last time I was a bridesmaid, at a beautiful rooftop wedding in Manhattan in September, my friend asked everyone to wear a pretty dress in a fall color.

Jennifer: The characters aren’t based on real people, but I definitely based Erin’s struggle to become an author and work in the publishing industry on my own struggle. Her frustrations are my own.

Jennifer: Finding an agent was not easy, but I did it first at age 22. Since I wasn’t published until age 35, I’d say finding an editor was harder for me! However, back in the day, I was doing things the hard way, without the internet! Publishing a novel is still a long shot, and it takes a lot of hard work and commitment. But with the information available online, at least it’s easier nowadays to look up more accurate information about agents and editors, and get your manuscript to someone who will enjoy it.

Jennifer: I have taken every creative writing class available to me in school, and I taught writing at three major state universities. It has always struck me how sensitive writers (especially unpublished writers) are about their stories, and how volatile these classes can become. I thought this would make a terrific, dramatic background for a romance novel.

Jennifer: Because this was the second book on a contract with MTV Books, it wasn’t as dramatic as some of my other sales! I came up with the idea a long time ago, and it had been percolating. When the time came to propose a new novel to my editor, I discussed the idea with my critique partner and got really excited about it, because she loved it. (I wish everyone had critique partners as helpful and supportive as mine!) My editor liked the idea, too, but she thought it was too sweet, and she asked me to make it “a little less Saved by the Bell.” So I did.