Sink Your Teeth Into Something FANGTASTIC With GCC Member Lucienne Diver

If you miss Buffy (and who doesn’t?), then I have the perfect replacement to fill the void in your heart—the Vamped Series by GCC Member Lucienne Diver. Her latest installment, FANGASTIC, just came out this month through Flux, and it sounds amazing! 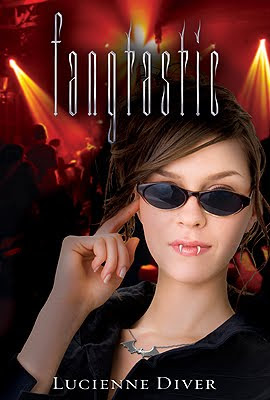 What do you wear to face down a cadre of killer kids?

Gina Covello would rather be working on her manicure than missions for the Feds’ paranormal unit to which she’s been recruited. That changes when a group of killer kids takes out a family in the sunshine state and disappearances begin to plague the lifestylers who only play at the kind of existence our fanged fashionista leads. She and her crew are sent undercover into the vampire clubs…which turn out to be run by real vampires. While Gina’s BFF Marcy hangs with the steampunk-styled Burgess Brigade that spawned the killer kids, Gina herself is supposed to get in good with the fanged fiends behind the scenes, even to the point of playing double-agent, offering to hand over her powerful boyfriend Bobby. Her playacting threatens to become a bit too real when she discovers things about her spy handlers that make her wonder whether she’s truly on the right side of the battle between Feds and fangs.

Q: In ADIOS TO ALL THE DRAMA, Mariana is a bridesmaid in her cousin’s wedding. How many times have you been a bridesmaid and what’s the worst dress you ever wore?
Lucienne: I’ve been a bridesmaid three times, and I have to say that none of the brides made me wear anything truly hideous! My sister had a hippy style outdoor wedding, and I’ve even worn that dress again, although it’s hand wash and I have an aversion to clothes that are more high maintenance than me. I’m pretty sure that couldn’t be said for my heroine in the Vamped series. I refer to her as the fashionista of the fanged. You don’t know high maintenance until you take away a glam girl’s reflection and compromise her ability to do her hair and make-up.

Lucienne: My hero and heroine draw a little from people I know, but they’re not a direct correlation. For example, Bobby might get his killer blue eyes and shaggy dark hair from my husband, who’s also, come to think of it, a geek boy just like him. Hmm. Aside from that, part of Fangtastic is set in a club where the vampire lifestylers like to hang out, which turns out to be run by actual vamps. There’s a place something like this in Tampa (where Fangtastic is set), and one or two of the characters might be drawn, at least physically, from some of the colorful characters I saw there when I went to research.

Lucienne: It wasn’t harder for me to find an agent. (She’s the one who in turn found me an editor.) However, I’ve had a few snarky comments from people who think I’ve gotten published because I have some sort of in. Oh, if only it worked that way! Publishing is a business, and no matter who you know, editors have to get second and third reads, run it past marketing, run profit and loss statements (P&Ls), and take it through an acquisitions meeting. The editorial director has to green light any offer made and the amount. I can’t just take a novel to my good friend down the street and expect him/her to buy the book because we’ve had a few laughs over drinks. If the acquisition doesn’t make financial sense, if the publisher doesn’t think it will sell in sufficient quantities to earn back their investment with interest, it doesn’t get bought.

Lucienne: I’m a forensic show junkie. (Actually, when I first graduated college, I applied to graduate schools for forensic anthropology and to agencies and publishers for entry level positions. Publishing got back to me first.) I saw a segment years ago about the vampire killings in Florida. A teenager who thought (or at least said he thought) that he was a 500 year-old vampire recruited others and led them to murder the parents of an ex-girlfriend. Luckily, they were caught. This made an impression on me, and when it came time to set a vampire novel in the sunshine state (I like the irony), that story rose to the forefront of my mind. Of course, there’s a lot more going on in Fangtastic, as my heroine, Gina Covello, discovers some things about her spy club handlers that make her wonder if she’s on the right side in the war of Fed vs. fang.

Lucienne: I almost always seem to be in an airport when offers are made for my work. If I’m remembering right, though, this time I was shopping in New York at a store called Mango Mango. One thing my heroine and I have in common, we love to shop!