The second book in GCC member Myra McEntire’s Hourglass series is out this month, and I have to say, it has one of the prettiest covers I’ve ever seen. Love it! (The wallpaper in the background almost looks like the stencil on my bedroom wall.) So if you’re looking for a book with a great twist on time travel, check out TIMEPIECE, out this month through Egmont USA. 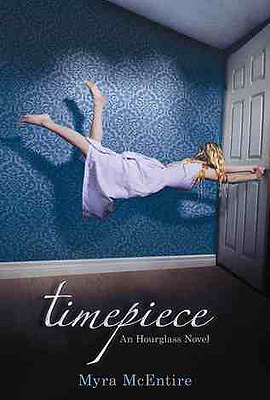 As always, here’s a little bit about the book to get you hooked:

Kaleb Ballard was never supposed to be able to see ripples—cracks in time. Are Kaleb’s powers expanding, or is something very wrong? Before Kaleb can find out, Jonathan Landers, the man who tried to murder his father, reappears. Why is he back, and what, or whom, does he want?

In the wake of Landers’s return, the Hourglass organization is offered an ultimatum by a mysterious man. Either they find Landers and the research he has stolen on people who might carry the time gene, or time will be altered—with devastating results for the people Kaleb loves most.

Now Kaleb, Emerson, Michael, and the other Hourglass recruits have no choice but to use their extraordinary powers to find Landers. But where do they even start? And when? Even if they succeed, just finding him may not be enough. . . .

Here’s what Myra had to say:

Myra: I’ve only been a bridesmaid once, and my dress was pretty sweet!

Myra: I’ve based one character on two girls I know, and I’m actually getting ready to put two more into my third book, Infinityglass.

Myra: One book I’m working on came from a place I used to play when I was a kid. I’ve tried to work it into so many stories, and I finally just found the right one!

Myra: It’s a third book in the series, and I hoped it would sell, but nothing is certain. It took a long time from offer to signed contract, but I just signed it last week.

Thank you, Myra! Now, everyone go out and buy books, lots and lots of books!