Snakes, Snails & Puppy Dogs Tails: That’s What Boy Books Are Made of…

Okay, I’m just joking. I don’t really think boy books are snail-like. (And you know what I never got about that offensive little rhyme? What’s wrong with puppy dog tails?) Anyway, there’s been a lot of debate in the blogosphere this week about boy main characters in young adult fiction. 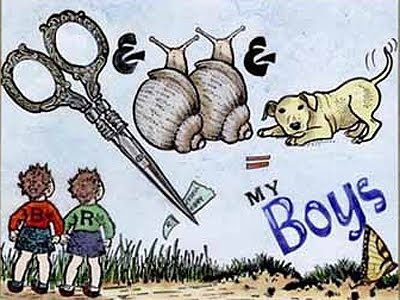 Specifically, two YA authors made excellent contrasting points: Hannah Moskovitz and Tamora Pierce. And while their blogs don’t directly respond to one another (just a warning, the comments get wonky), the gist is whether female characters are more fully developed, three-dimensional, in YA lit than boy characters? And is that the reason boys often skip the YA genre and go straight from Middle Grade to Adult?

Personally, I agree with Hannah. I do find boy characters are often stereotypical in YA novels, but that may be because I don’t read fantasy/action books (which Tamara writes, and which often cater more to boys).

I do, however, have an idea for an MG novel that features a boy protagonist, and while this concept is not next in line for take-off writing-wise, the whole boy-book debate brought it forward in my mind. I thought that if I was going to write a “boy book” then I’d better flesh out the character, and what better way to do that than to interview my twelve-year-old nephew.

(See, I knew there was a reason I agreed to babysit my brother’s kids this summer!)

So against child-labor laws, I put him (and his 10-year-old sister) to work for me, giving me insight into the tween boy mind. 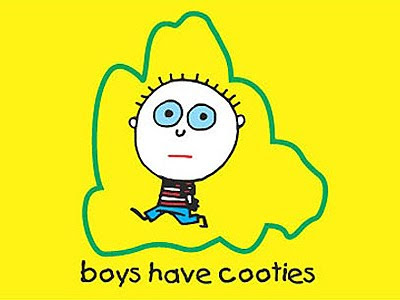 Here’s what I learned about Seventh Grade Boys:

1. A boy must tell a girl directly (to her face!) that he likes her otherwise he will be called “a chicken.”

2. He must hate all sixth graders (because they’re younger, duh).

3. Boy fights typically include one boy telling the other he can “beat him up,” and the other claiming, “No, you can’t.” Rarely do said arguments actually lead to punches.

4. Boys get detention more than girls, often for “being fresh to the teacher.” Though girls still get detention, but most likely for “talking too much.”

5. Boys think it’s stupid when girls fight. Girls have “a lot more drama,” and after fights “girls hold grudges” while boys “get over it.”

6. If a boy had a friend who recently lost a loved one, he would go to the funeral, say “he’s sorry,” and then try to make him laugh the next time he saw him, so he would “feel better and not think about it.”

7. Boys get mad when other boys try to “show off” at sports. Being good at sports, or just mean and scary, tends to lead boys to popularity.

8. The boy who mixes crackers, pudding, hot dogs and yogurt together, then eats it, is considered “brave.”

10. If a boy had a female friend who lived next door, they would hang out together, most likely “on the computer,” playing games. But his boy friends would tease him that “he likes her.”

So, there’s a taste! I asked a bunch more specific questions relating directly the plot of my proposed book, but I’m not ready to reveal those yet. You know how it is, the idea needs to cook a little longer.

So this summer has brought us soap fans the return of James Franco, and once again I’m disappointed. I liked the on-location art show, and I like that they’re even trying to associate the word “art” with soap operas, but other than stunt-casting, there really is no point to this story. Jason isn’t learning from his mistakes, or trying to differentiate himself from Franco by, you know, not killing people. The police aren’t getting any smarter. (Let’s release a mind-bogglingly rich hit man out of maximum-security prison to help us catch some other dude. Sure! He’ll just go right back to Gen Pop when the case is closed!) And the baby kidnapping? Really? Why wouldn’t Franco take Jake if he wanted to provoke Jason? Are you telling me this stalker is the only person in Port Chuck who doesn’t know Jake’s paternity? And while I’m a Sam fan, I have to admit it’s ridiculously bizarre that Jason isn’t more concerned about Liz’s baby. It’s like they won’t even mention the name “Liz” around Jason, to the point I’m not even sure if he realizes it’s her kid. Character growth, writers. Google the term before your next stunt casting. I’m already worried about the return of Brenda…