Soap Operas and YA Novels: Why They’re Besties

So anyone who reads the blog knows that I’m a big soap fan. I grew up on them like other kids grew up on Sesame Street. (Thanks, Grandmom!) Young & the Restless, ATWT, Days, AMC—at one point I’ve dabbled in them all, but lately I’m exclusively a GH fan. And anyone who’s been following the happenings in Port Chuck knows that…Brenda is back! So I’ve decided to take this opportunity to examine the similarities between soaps and YA to uncover why they’re both awesome. And trust me, they have more in common than you think. 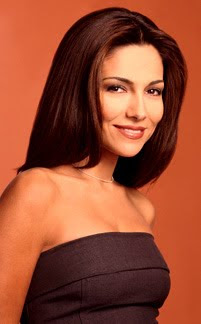 Now, first off, most of you assume that all soap fans are stay-at-home moms or bored lonely women. Believe me, such is not the case. Maybe at one time the genre was limited to those home in the afternoons, but that is why God gave us DVRs. You might also assume that soap fans are old (like my grandma), but hey, she started babysitting me when I was in kindergarten—not the stereotypical age of a soap fan, but the five-year-old demo is definitely out there.

This means that I was watching soaps while I was reading young adult (mostly Christopher Pike and Sweet Valley), and I know I can’t be the only one with this story. There are correlations here, which is why I’ve compiled the following list:

Soap Operas & YA: Why They’re BFF

1. Romance. The heart of any good story is a little lovin’. This is obvious for soaps, but even look at some of the most action-oriented YA novels (Hunger Games, anyone?). A doomed romance keeps you turning the page.

2. Unusual age progression. In the soap world, there is a far-too-common condition known as SORAS (Soap Opera Rapid Aging Syndrome). This is when a six-year-old character comes back from summer break as a 17-year-old in high school student with an abusive boyfriend. They have to move the story along, folks. In YA, the problem is in reverse. Seriously, how long were those Sweet Valley twins in high school? And Nancy Drew, shouldn’t she own her own detective agency by this point?

3. Tent Poles. Soaps tend to revolve around one or two core characters (Sonny Corinthos? Gag me now). YA does as well. You’re not going to find many young adult novels told in the omniscient point of view. You’ve got your main first-person narrative holding up the rest of the tent.

4. Crazy Storylines. So Bella might not have gotten caught in a collapsed cave, was presumed dead, and slept with her best friend’s boyfriend while trapped, but that doesn’t make her story any more realistic. You’ll find teenage spy cheerleaders, cursed 18th Century mystical sisters, revolution-leading teen warriors, etc. in YA. Now is that really much different than 17-year-old boy waking up from a coma after a year without brain damage only to land in prison a few months later for killing his step mother?

5. Soap characters come back from the dead, YA characters are un-dead. Same difference. Point made.

So you see, they really have a lot in common. So get set your DVR’s for Brenda’s return on GH this week. And pray that after all these years of absence the execs didn’t lure Vanessa Marcil (of Las Vegas fame) back to the soap world only to destroy her character (like they did with Emily’s return or the original-Carly). I’m warning you, writers—make this good, or I will march over to L.A. and write the story myself. Don’t think I won’t…