SOMETHING WICKED Is Headed This Way With GCC Member Kelly Parra

Just in time for Halloween “something wicked this way comes,” or so said Shakespeare in MacBeth. You know who else is talking about SOMETHING WICKED? The authors of this spooky new YA anthology featuring GCC member Kelly Parra. So if you’re looking for something to give you goose bumps this season, check out SOMETHING WICKED through Buzz Books USA. 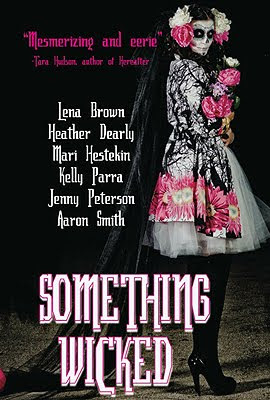 Beware the Midnight Troll on your late-night stroll by Mari Hestekin. Swim at your own risk Under Loch and Cay by Jenny Peterson. A curse of spiders on campus means Arach War by Lena Brown. Through a Glass Darkly one could lose a soul by Heather Dearly. Supernatural Hunters turn to the sea in Mermania by Kelly Parra. Social media goes to the ghouls in Spectral Media by Aaron Smith.

Don’t miss this paranormal fun for tween, teens and adults!

Kelly Parra’s short story “Mermania” continues Teen Supernatural Hunters Jaz and Blake’s paranormal adventures. The duo debuted in “Darkness Becomes Him” in the young adult anthology PROM DATES TO DIE FOR as they battled a soul hungry dark angel. In SOMETHING WICKED a merman entrances Jaz and it’s up to her and Blake to rush against time before Jaz grows her own tail by the full moon!

Here’s what Kelly had to say:

Kelly: Hi Diana, thanks for having me on your blog! I’ve only been a bridesmaid once. I was about 15 years old and it was a floral dress I never could wear again. But I will tell you I was hit on by the bride’s brother, which made it really awkward!

Kelly: For this story, I haven’t. When I write contemporary YA, I do tend to take snippets from my life and add it to my storytelling. However, my story “Mermania” in SOMETHING WICKED is about Jaz and Blake, orphaned teen supernatural hunters who hunt mythical monsters. So basically I could run wild with my imagination on this one!

Thank you, Kelly! Now, everyone go out and buy books, lots and lots of books!