GCC member Amanda Ashby has two books debuting this summer, and both sound absolutely adorable. I mean, what preteen wouldn’t love the power to grant wishes? Check out WISHFUL THINKING and UNDER A SPELL, two books in her new series published by Puffin. 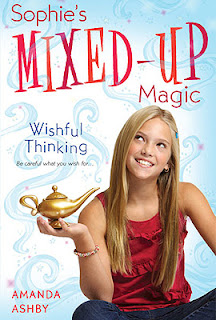 As always, here’s a little bit about her books to get you hooked:
Book One: Wishful Thinking
Be careful what you wish for…
After eleven year old Sophie accidentally gets herself turned into a djinn, she starts to think that it might not be so bad after all. (Of course, that’s after she gets the whole orange skin problem sorted out.) Who wouldn’t enjoy having the power to grant wishes! But when Sophie develops RWD (Random Wish Disorder) and can’t STOP granting wishes, things get more than a little mixed-up!

Book Two: Under a Spell
And that spells T-R-O-U-B-L-E…
As Sophie gets used to her magic, her relationship with the adorable Jonathan Tait is blossoming. There’s only one problem: Jonathan’s twin sister, Melissa. She’s a total mean girl who seems intent on making Sophie’s life miserable. On top of that, Melissa somehow seems to sense that Sophie has powers–and manages to bind Sophie to her in a totally self-serving way. Can Sophie figure out a way out of this–without ruining her chances with Jonathan?

Here’s what Amanda had to say:

Amanda: I’ve never been a bridesmaid! I’m from a small family so there were no weddings growing up and not that many of my friends have had traditional marriages (not to mention the fact that I move countries a lot). However, now I feel like I’ve missed out on a rite of passage and I feel like I should invent a game called Bridesmaid Party and make everyone wear really bad dresses!

Amanda: I’ve never based characters on real people but I definitely take snippets of myself and put them into books (Malik, who is Sophie’s ghostly djinn guide is addicted to Cheetos and American Idol and let’s just say that this in this case the literary creation didn’t fall far from the tree!).

Amanda: An agent, definitely! I never really tried to go directly to an editor so I spent a long time writing books and trying to get an agent. Of course what I didn’t know at the time was that it wasn’t my writing that they were rejecting, it was my story and when I finally wrote the “right” story, that’s when I got an agent.

Amanda: This one was a slow build. I have always loved old TV shows like Bewitched, The Ghost and Mrs. Muir and I Dream of Jeannie and then when I was looking for an interesting mythology to explore I got hooked on djinns. From there I just started to explore what it would be like for a regular girl to have a secret world and a secret power that she had to hide from everyone!

Amanda: My publishing sales always seem so unexciting because I live so far away from America where my agent and publisher are so we do everything by email! Anyway, my agent had told my editor that I was doing a middle grade book and would she would be interested in seeing it. She was and while she loved the idea, she asked for some revisions on the first few chapters and also asked if I had considered making it a series. So I went back and revised it and then wrote a very brief summary for two more books and we sent it back to her. A few weeks later I got an email from my agent with an offer for a three book deal.

Thank you, Amanda! Now, everyone go out and buy books, lots and lots of books!