Gotta love a vampire series where a fashion diva is cursed without a reflection for all eternity. How will she know which shoes go with this outfit? It’s an intriguing, and witty, twist on the vampire genre tackled by Lucienne Diver in the second book in her YA series, REVAMPED. It recently debuted through Flux. 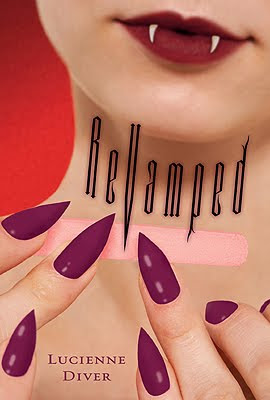 In VAMPED, Gina and her minions defeated a vampire vixen, a psycho-psychic and the vampire council of Mozulla, Ohio. Gina was all ready to expose vampires to the world in all their fanged fabulosity…until the Feds arrived to sweep everything under the rug and make them an offer they couldn’t refuse.

In REVAMPED, Gina and her boyfriend Bobby are sent undercover to infiltrate a New York high school where some seriously weird stuff is going down. Worse than that, Gina’s new super-secret identity is as goth-girl Geneva Belfry. No color palette to speak of. More chains than a bike rack. And don’t even get her started on the shoes. At least she won’t be too worried about blood spatter when kicking the butt of her newest nemesis, who’s decided that the high school makes a perfect playground.

Lucienne: When I was about seven years old, we took our first family trip up to Lake George, NY. It was a hideously hot day, and I don’t remember whether our car didn’t have air conditioning or if it just wasn’t up to the task, but we stopped frequently on the drive to cool down at the rest stops and rehydrate.

On one of our stops, I picked up a passenger, although I didn’t know it yet. Now, keep in mind that I have an insect phobia…

We’re riding along and I can feel something crawling up my leg beneath my jeans. I’m starting to panic, and my father (with his voice like Lurch from The Addams’ Family) is trying to convince me that it’s just sweat running down my body and getting irritated with me when I don’t take his word for it. Finally, he finds another rest stop, pulls into the parking lot and right there has me take down my jeans (I was only 7). Sure enough, there’s a walking stick the size of my thigh staring at us.

I scream and he tries to give my sister and I a nature lesson…A NATURE LESSON! While holding the insect that has terrorized me for the past ten miles or so!

I finally convince him through reasoned logic and no small amount of screaming that I’m not going to retain any of the fascinating information he’s relaying while I’m jumping out of my skin, and he releases it into the wild, very gently placing the clearly demonic insect on a tree branch while orating on how well he blends in. Sigh.

We get back in the car, by which point the crayons my sister and I had been using to color in our books have melted all over the back dashboard of the car. My father is oh-so-thrilled. By the time we reach our cabin in the woods, we’re hot and cranky and can think of nothing more than taking a dip in the pool of our cabin complex…

Um, I can go on, but I think the full story takes up a guest blog all by itself. Let’s just say that after that there were encounters with squirrels sharing our cabin, blood, stitches, a trip to the hospital, swimmer’s ear, a drop-sided toaster and… what am I forgetting?

As a fellow Entomophobic, I share in the horror of finding that bug on your leg. In fact, now I feel itchy.

Lucienne: From the time I was eleven, I knew I wanted to be a writer. Before then it was a nurse (my father informed me YOU WILL BE A DOCTOR), an anthropologist (GEOLOGIST, my father insisted, that’s where the money is), a cryptozoologist (which shut him right up), an actress, Princess Leia….

Lucienne: We had my birthday party at my parent’s “yacht club,” which sounds all high-brow, until you realize that we called it “the tub club”…if you or your vehicle stayed afloat, you were in. We had a blast. Two of my friends, with whom I had a gag war going, presented me with a Butthole Surfers album, and we danced the night away.

Lucienne: Oh, I’m definitely a pantser. Generally, I only “outline” a few chapters ahead, because by the time I get to the last chapter outlined, my characters have thrown me a curveball or things have veered off in a more natural direction or…. Plotting a whole novel from the start would be, for me, an exercise in futility.

Q: Where were you when you found out that your novel was going to be published? Tell us the story.

Actually, I was at the airport when I got the news, but for some reason, they wouldn’t let me through security for the recreation, even after I explained!

Seriously, how cute is that slide show? Love her!