Write A Book, Then Buy A Book–It’s That Simple

So I recently saw an article on Galleycat that solves the publishing crisis in such a simplistic and obvious way that I can only call it genius. Anyone outside the industry may not realize this, but books aren’t doing so hot right now. The industry is sort of facing what the music industry did during that whole Napster thing. (The Internet? What is that? Someone call Metallica!) And while they were trying to figure out how make money off this wacky e-book thing while not killing brick and mortar bookstores with complicated lawsuits and authors guild disputes, one independent publisher found a solution that only required a few lines of text. 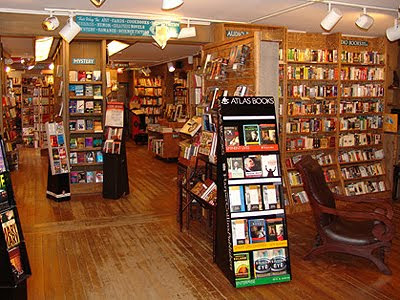 You see, for as many books as there are on bookshelves, there are millions sitting on the hard drives of laptops across America. Turns out most people really do think they have a book in them. And each of those writers fire off letters to agents and independent publishers daily (only indie publishers will accept unagented material). Imagine the amount of manuscripts these publishers receive on a regular basis, it’s enough paper to make an environmentalist find a steep cliff.

And one such indie publisher decided to use those wannabe writers to pump air into the life support of your local bookstore. Tin House Books is offering, for a limited time, to accept unsolicited (ie. unagented) manuscripts if, and only if, the writer mails the manuscript with a receipt proving he/she has purchased a book at a bookstore recently.

Think about that: they will read your book if you prove that you read books yourself.

“Writers who cannot afford to buy a book or cannot get to an actual bookstore are encouraged to explain why in haiku or one sentence (100 words or fewer). Tin House Books and Tin House magazine will consider the purchase of e-books as a substitute only if the writer explains: why he or she cannot go to his or her neighborhood bookstore, why he or she prefers digital reads, what device, and why.

Writers are invited to videotape, film, paint, photograph, animate, twitter, or memorialize in any way (that is logical and/or decipherable) the process of stepping into a bookstore and buying a book to send along for our possible amusement and/or use on our Web site.”

(BTW: the last book I purchased at a bookstore was a Sneezy Louise children’s book by Irene Breznak).

Okay, I recently got hooked on this show to the point of unhealthy obsession. You see, I started out just dabbling. I watched a couple of reruns because there’s nothing else to watch on summer TV. New to me, right? Then I found myself looking forward to Thursdays so I could see the next episode. No biggie. Fun new show. Then, last Thursday, the meanies at the CW decided to skip from episode 6 (the last one they aired) to episode 14. I nearly freaked. How did the characters end up in some tomb? Why are Damon and Elena so tight? Wait, did Elenda sleep with Stefan and I missed it? Of course, the CW did not hook me up with the missed back episodes on their website and every other site I found containing them wanted me to pay (yeah, right) or download a bunch of garbage onto my computer. But alas, Twitter came through. I posted my plight via Tweet, and @lafemmereaders connected me with this site. Granted, it’s got some inappropriate banner ads and the resolution of the videos is like 72 dpi, but still, I am now officially caught up! And I hold by my claim that this show has better acting than Twilight. (And Damon is hotter than Edward.)