I was recently a speaker at the State of Maryland International Reading Council Conference (SoMIRAC), and while there I happened to mention that I had a baby. (The girl just sneaks into conversations these days.) Anyway, being as though many of the teachers attending looked as though they had some very adorable grandchildren at home, I was asked whether my writing has changed since I became a mother. Specifically, they wanted to know whether the topics I cover in my novels would be different because I knew my daughter would read my books one day. 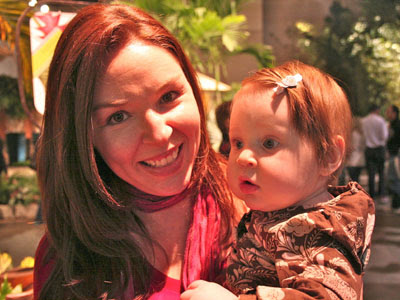 To be honest, I haven’t worried about this much. My baby’s still a baby (she turns 1 in a week!), so the idea of her reading her own books seems as far away as her manning a space shuttle to Mars.

But still, would I feel uncomfortable sitting down and explaining to her that she should do as I say, not as I write?

Now, don’t get me wrong, within the grand scheme of the Young Adult genre, my books are practically Pixar movies. There’s no sex, no guns, no F words. But there is some drinking, and lying, and mean girls, and (for shame!) parental disobedience. She might take it as a free pass to do these things herself and blame it on my books. (I can hear it now. “I learned it from reading YOU!”)

But, if I’m being completely real, she’s probably going to do these things anyway. Because that’s what teenagers do. Writing about, or not writing about these realities, is not going to make her any less of a teenager.

So Juliet, if you’re reading this thirteen years from now, don’t even try the “you put it in your book” excuse. By then, I will have had more than a decade to craft a really awesome response. I’m ready for you.