It’s all fun and games until someone gets dead, right? Just in time for Halloween is a spooky new YA Horror by GCC member Gretchen McNeil. Take your coolest high school party, set it on an island, and toss in a murderer and you’ve got the start of TEN, an amazing new book out this month through Balzer + Bray. Plus, the fan girl in me has to note that the book’s got a blurb from Christopher Pike!

“TEN is a real page turner! Gretchen McNeil knows how to plot a thriller: Her setup is flawless and the suspense kept me on the edge of my seat.” – Christopher Pike, #1 New York Times bestselling author of the THIRST series and REMEMBER ME

Oh, swoon! Remember Me, Fall Into Darkness, Chain Letter, I grew up on Christopher Pike. He’s one of the reasons I write for YA now. Go, Gretchen! 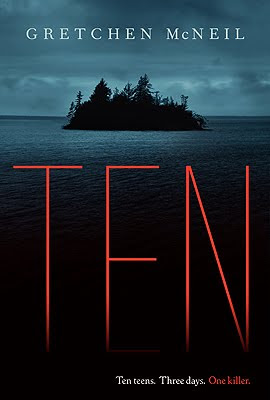 And their doom comes swiftly.

It was supposed to be the weekend of their lives – three days on Henry Island at an exclusive house party. Best friends Meg and Minnie each have their own reasons for wanting to be there, both of which involve Kamiak High’s most eligible bachelor, T.J. Fletcher. But what starts out as a fun-filled weekend turns dark and twisted after the discovery of a DVD with a sinister message: Vengeance is mine.

Suddenly, people are dying and the teens are cut off from the outside world. No electricity, no phones, no internet, and a ferry that isn’t scheduled to return for two days. As the deaths become more violent and the teens turn on each other, can Meg find the killer before more people die? Or is the killer closer to her than she could ever imagine?

Here’s what Gretchen had to say:

Gretchen: Four times. The worst dress was when I was thirteen in my cousin’s wedding. It was royal blue tee length satin with puffy ¾ sleeves. Yeah…

Gretchen: Lori is a singer, and one of my favorite songs from my opera singing days – “Sure On This Shining Night” by Samuel Barber – plays a significant role in the plot. I even recorded the song for the book trailer. Yes, that’s me singing…

Gretchen: Hmm. It was similar, actually. My first book failed to land me an agent, but with my second book, I had several offers. However, that book didn’t land me an editor, and then my third book did. Apparently, I’m all about trial and error.

Gretchen: My publisher wanted another horror/suspense novel from me after POSSESS and I wanted to do a throwback to the old Christopher Pike and Agatha Christie novels I loved as a teen. Voila!

Gretchen: I was at work. It’s one the weird dichotomies of my writing life that I still work a full time day job. And since I’m on the west coast, all of my publishing news comes while I’m at my day job. It’s kind of hard, actually, to deal with the two. I frequently have to put my agent or editor on hold while I take a work call!

Thank you, Gretchen! Now, everyone go out and buy books, lots and lots of books!